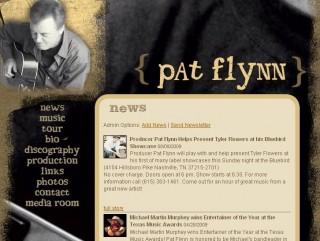 Pat Flynn Music was originally hosted on a music service network that was closing its doors. Pat hired me to move the entire site to a new host and build a new backend for the data. Everything was scrubbed manually from the old host, which did not allow access to the source code or database at all. I rebuilt the site in Drupal and developed a custom theme to recreate the design they had with the old host. Some design freedom was afforded to me, so I designed some additional admin shortcuts into the layout and added some gallery features.
Tools used: Drupal 6 CMS, Views module, PHP5, Photoshop CS5.